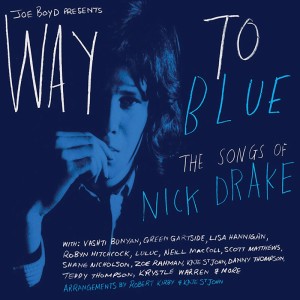 I feel a little guilty. I’ve loved the songs and music of Nick Drake for so many years I just assume that a) everyone else knows his work as well and b) everyone loves his song writing, guitar playing and singing as much as I do.  f you don’t, then this is a good place to go and look: http://www.brytermusic.com/

Way to Blue the Songs of Nick Drake contains interpretations of Nick’s songs and is taken from two concerts, one in London the other in Melbourne.  t’s a live album then and mixed by Joe Boyd, who was responsible for the first two of the three Nick Drake albums.

Let’s get some stuff out of the way. The recording and production are right up there with the very best. It could have been made for people with hi-fi systems. It’s outstanding in every area. The one slightly strange thing being that the sound of the crowd has been taken out. I suspect that there would have been a reverential silence whilst the artists were performing. It does mean though, that some of the songs end rather abruptly in order to avoid (I guess) any clapping and cheering. Make no mistake though, despite what you’re hearing, these really are live songs and the level of musicianship is just outstanding.The great double bass player Danny Thompson, who played with Nick Drake, is part of the band, as is Zoe Rahman, a truly talented jazz piano player. I pick these two out but the rest of the band is right up there. As for the singers, well there’s Lisa Hannigan who of course sang with Damien Rice on O, there’s Green Gartside from Scritti Politti and Robyn Hitchcock to name just three. There isn’t a single bad performance and these are not recreations of the songs as Nick originally sang them but very definitely interpretations. Whilst, as I’ve said, there isn’t a bad song on this album, there are a couple of stand-outs. Firstly, Green Gartside singing Fruit Tree and then Krystle Warren singing Time Has Told Me. There’s an interesting piece about this in the comprehensive sleeve notes. When Joe Boyd first heard Time Has Told Me he tried to persuade Roberta Flack that it should be her follow up to The First Time Ever I Saw Your Face – and listening to Krystle sing it, you can see why. It’s always been a song I’ve loved, but here it’s re-imagined as a quite exquisite ballad. Very beautiful and very moving. Teddy Thompson’s version of River Man is also quite exceptional.

I can’t recommend this highly enough. Even if this is the first time you’re going to hear Nick Drake songs, these really are quite wonderful interpretations and in a funny way, they allow you to see the sheer beauty and poetry of his lyrics better than the originals. Nick’s versions can, on occasion, be dark and desperate to the point of being too much to listen to (emotionally at least, they’re all quite exceptional recordings). That darkness is still present here but the emphasis is more on the beauty, although Lisa Hannigan’s version of Black Eyed Dog is a howl of pain and anger, whilst Nick’s sounds more like desperation and resignation (Black Eyed Dog is a euphemism for depression).

It’s impossible not to recommend this album. It sounds great on a hi-fi.  It sounds even better on a better hi-fi.  But for a music lover, it’s going to be a wonderful experience, regardless of what you play it on. Fans of Nick Drake have to have this and those of you who haven’t come across him before –  have a look at the link above.  I’d recommend all of the Nick Drake albums, but be warned, Pink Moon can be a very difficult and dark album to listen to. Start with Five Leaves Left or Bryter Layter.  Nigel Finn

Hi-fi cables – what are they for ?  click here to find out who we are and why we do what we do