Great Albums (and bands) you could have missed: Smoke Fairies “Blood Speaks” 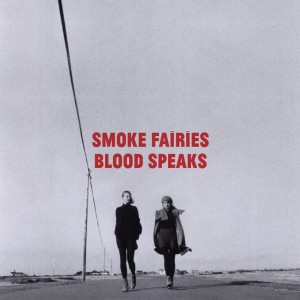 My reaction to official looking envelopes is probably not untypical, a mixture of apprehension and annoyance. So what a nice surprise to open it and have the Smoke Fairies Blood Speaks album fall out of it.  For this particular delight thank you Tony, I owe you one.The Smoke Fairies are Jessica Davies and Katherine Blamire, both blessed of crystal clear and very English voices.  Think all those classic folk rock bands that reshaped folk music in the late sixties.  Blood Speaks isn’t folk, though its influence is obvious, and the harmonies and the structures of songs make comparisons to the Indigo Girls hard to ignore.  Blood Speaks though is unmistakably and quintessentially English; it has a degree of the delightful (and very English) musical eccentricity that nudges what might be an alt rock excursion into something else altogether.

The guitar and bass driven opening track Let Me Know has urgency, energy and a nervous anxiety. The instruments are mixed dense and heavy, with Jessica and Katharine’s voices ringing clear and pushed to the fore.  This mix runs through the rest of Blood Speaks and works well.  By mistake I left track two, Awake on repeat. The mix of dark sounding guitars playing ringing harmonics and cymbal heavy percussion creating a hypnotic looping and involving rhythm that draws you in and works so well that I’d listened to it a few times before realising what I had done.  Jack White and Richard Hawley both love the Smoke Fairies and I bet Richard Thompson does as well.

This is the first in our Great Albums (and bands) you could have missed series of reviews. We’d love to hear your comments and feedback on the album.

We are loving the hi-res music choice from Qobuz and ...